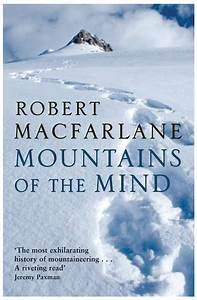 O the mind, mind has mountains…

Robert MacFarlane had me at the epigraph of his first book, Mountains of the mind. Like many of Hopkins’ lines, this, from No worst, there is none, has stayed with me since I first read it as a 15-year old, and it is no secret that MacFarlane is hugely inspired by Hopkins’ work; his (and Jackie Morris’) incredibly beautiful The Lost Words pays homage to the 19th Century poet in almost every spell.

Hopkins’ poetry makes the heart and mind soar, his words capture flight and air and beauty and light. And even in the depths of despair he evokes the vastness of the mind. O the mind, mind has mountains…How could I not fall headlong into Robert MacFarlane’s mountaineering book when he opens it with a quote that has been part of my own consciousness for thirty years.

Although I had read and loved both The wild places and The old ways, I hadn’t read this, MacFarlane’s first book. Towards the end of 2017 a friend was wondering what to give her husband for Christmas. Given his interests, I suggested Mountains of the mind. Although I hadn’t read it, I was enough of a fan of MacFarlane’s work to be sure my friend’s husband, a lover of wild high places, would enjoy this gift. My friend duly purchased the book, wrapped it and put it under the Christmas tree. The result was not as I had expected. My friend’s husband plodded through it, forcing himself to turn each page. My friend’s father fared worse, and gave up half way through. Oh dear, I thought. It was MacFarlane’s first book, after all, so perhaps not as good as those that followed. But, it had won awards and was the inspiration for a film, and I still wanted to give it a try.

When a bout of painful and debilitating sciatica robbed me of my ability to leave my living room for most of October, I asked my friend if I could borrow her husband’s copy. ‘He says you can keep it’, she said, when she delivered it a couple of days later.

I started to read it immediately. And I was immediately engrossed. What never fails to grip me about MacFarlane’s writing is his seamless blending of well-researched and beautifully recounted cultural history, mixed with personal memoir and a dash of hero worship. In Mountains of the mind MacFarlane gives a fascinating account of an evolving Western European and, in particular, British sensibility towards mountains and high places. This rich and beautifully recounted reconstruction of the cultural, social and philosophical foundations of our current fascination with mountains would, on its own, be enough.

But MacFarlane, in this, as in his other books, goes further. This cultural history of mountains and mountaineering is also a personal history. It is the story of his own, and his grandparents’, love affair with mountains. It is a memoir of mountain longing, of mountain nostalgia and of choosing between mountain and family. And, in reflecting on this choice between mountain and family, MacFarlane, inspired (as I have been, though I have little to show for it) by the writing of Francis Spufford, delves into the Everest obsession of George Mallory, who died on the mountain in 1924. Personal history, the life history of the hero and cultural history blend seamlessly into a book that I could not put down. I read it at lightning speed and, when I reached the end, wanted to return to page one and start over.

I have yet to ask my friend’s husband what he didn’t like about the book, although I have my suspicions. It carried me away from my living room, over the orange village roof tiles and the hills of southeast Portugal, away across space and time, to different ways of being and thinking and living with mountains. It made me explore the cultural embeddedness of my own love of the environment and of mountains in particular. And it reminded me again why I love Robert MacFarlane’s instantly recognisable blend of nature writing, history and memoir. I am eagerly awaiting the opportunity to read his 2015 book, Landmarks, which is currently sitting on my bookshelf.

5 thoughts on “Mountains of the Mind”