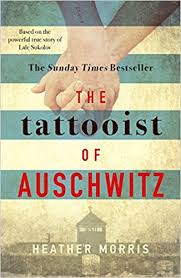 When I visited Ireland for a few days after Christmas, among the books placed on my bedside locker by my mum was The Tattooist of Auschwitz. I’d heard of the book, but didn’t know much about it. I started reading it in bed one morning and read the final page the next morning, partly because it’s a short book and partly because it was a compelling read.

It recounts the story of Lali Sokolov, a Slovakian Jew who was transported to Auschwitz in 1942. At the age of 87, Sokolov told his story to Heather Morris from his home in Australia. From start to finish this is a tense read. Early on he meets Gita, a fellow prisoner at the camp and from one page to the next one wonders how he will survive to tell the tale, and if she will survive to be reunited with him following liberation from the camp.

It is a story of survival against the odds, in the face of evil and depravity, where unlikely alliances are formed and where wit and cunning may or, indeed, may not, lead to survival. The horrors of the camp flow through every line of the story; the disregard for human life, and the degradation and indignity remain with the reader long after the book has come to an end.

Although I cared deeply about Lale – as he is called in the book –, Gita and their friends and companions, I also found the book troubling. I found it hard to believe Lale’s freedom to, at times, wander around the camp, while his fellow prisoners had no such freedom. Knowing how quick the Nazis were to kill camp labourers, whether they stepped out of line or not, I was sceptical of Lale’s multiple near misses, where he had clearly broken camp ‘law’ and yet escaped with his life at the last minute. And I wondered at Gita’s friend, who was allowed to keep her beautiful hair because she was singled out to become the sex-slave of one of the camp commanders.

With these misgivings, I searched online to find out what others thought of the book. It has, of course, been a runaway success, and Morris has written a sequel, which tells the story of the girl with the beautiful hair, mentioned above. But what I found most intriguing is the reaction of the Auschwitz Memorial Research Centre, which has accused Morris of inauthenticity. Although Morris claims to have thoroughly researched Lali Sokolov’s account of his journey to, and time in, the camp, and has admitted to changing the timeline of some events for narrative effect, the Auschwitz Memorial Research Centre has found glaring inconsistencies and has been critical of some of the same elements of the story that I found troubling.

Why does it matter that Morris reordered timelines, made up elements of the story and, either wilfully or accidentally, inserted errors of fact into the story? It matters quite a lot, actually. There are many wonderful and harrowing works of fiction out there, which evocatively and meaningfully tell the story of the Holocaust and life in Nazi labour and death camps. One only has to think of Roberto Benigni’s tragically comic 1998 movie Life is beautiful or John Boyne’s 2006 novel The boy in the striped pyjamas to know that fiction can be as insightful and moving as real life accounts of victims and survivors. Or something like Thomas Kenneally’s Schindler’s Ark, which barely makes the grade as a novel, based on countless lengthy interviews with Holocaust survivors, with cross referencing of anecdotes, memories and conversations to ensure he made no mistakes in telling the story. I may have struggled with reading Schindler’s Ark, but it got its facts right.

The problem with not getting the facts right in what purports to be a real-life account of a survivor or Auschwitz is simple. For the Holocaust deniers out there, the far right, the fascists and neo-Nazis, one factual error about the Holocaust casts doubt on all accounts of the Holocaust; one made up element of the Holocaust means the whole thing was made up; one mixed-up timeline means all timelines were mixed up. This must never be allowed to happen.

So why did Morris alter timelines and make up elements of the story? It’s not as if what happened in Auschwitz wasn’t already horrific enough and contained sufficient drama for a memoir. Solokov’s life in the camp, tattooing his fellow prisoners, was extraordinary, and the fact that he met and fell in love with a fellow prisoner is a beautiful story of love blossoming in the face to hate, and hope flourishing in the face of evil. Changing Sokolov’s account of events for dramatic effect was surely unnecessary. This was Morris’ first book, and so perhaps was naive about the importance of rigorously researching her topic and faithfully sticking to the facts, in a book of this nature, that somehow falls short of being either fact or fiction.

The tattooist of Auschwitz is a beautifully written story about humanity, dignity and love under the worst imaginable conditions of hate and depravity. Morris would serve Holocaust survivors, and her readers, better by stating, at the outset, that this is a fictionalised and dramatized account of surviving Auschwitz, based on the real-life story of Lali Sokolov.

For further reading on the controversy surrounding the book, see this Guardian article about the reaction of the Auschwitz Memorial Research Centre and this New York Times review by Christine Kenneally

1 thought on “The tattooist of Auschwitz”