A version of this article was, indeed, published by Green Parent magazine in October 2018.

Foraging: An immersive way to learn about nature

On the morning of the day my younger daughter, Katie, was born, I was out amongst the hedgerows with her big sister, Lily, gathering blackberries. We ate at least half of what we gathered, Lily’s seventeen-month-old face and hands stained purple with blackberry juice, and returned home with the rest in tubs. Two days later we were once again out amongst the hedgerows, blackberry juice staining the sling in which newborn Katie slept. At two days old, this was her introduction to foraging and she’s been at it ever since. By the time she was two-and-a-half, Katie could identify and gather wild carrot, fennel and mint, and recognised a handful of inedible plants.

Besides fantastic opportunities to put healthy, organic, wild and free food on the table, foraging is an active and productive immersion in the natural world. Through foraging, children come to understand ecology and local environments, to learn from and about nature, and to develop a sense of their place in, and obligations to, our planet. 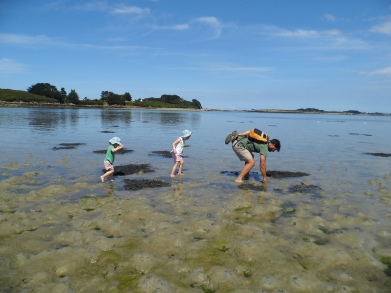 Foraging for clams in Brittany

As a nomadic family, we foraged for food in the middle of England, along the coasts of Devon, Cornwall, Ireland, Brittany and Galicia, and in southern Spain and Portugal. From trees growing in green city spaces to rural woodlands and open countryside, we have gathered almonds, apples, apricots, carobs, figs, hazelnuts, lemons, loquats, olives, oranges, plums and pomegranates. From seashores we have gathered clams, cockles and mussels, sea beet, rock samphire and wild carrot. We have gathered alexanders, asparagus, chard, fennel, lavender, mint, nettles and rosemary from woodlands, scrubland and walking trails, blackberries from hedgerows and camomile from fields. Lily and Katie have accompanied me as I’ve picked prickly pears and their dad as he’s gathered edible mushrooms.

As humans, we are increasingly disengaged from the natural world. And the more disengaged we become, the less we appreciate the incredible world around us, or understand our place in it and our obligations to it. Providing our children with opportunities to be immersed in the world helps them to develop that sense of appreciation, understanding and obligation. Immersion helps us to become part of the world again as we learn about the seasons, ecological niches, how plants depend on each other, and the lives and behaviours of animals. When we engage with the world, when we come to know it intimately, we are in a greater position to care for it, and to recognise our obligations to it.

Among the most ancient of ways to engage with the natural world is through foraging for food. Our ancestors have been doing it since before we were human. Until the late 1960s paleo-anthropologists believed that language, tool use and group organisation – those cultural characteristics that make us human – were developed and honed through hunting. The earliest tools, it was believed, were those used to hunt, kill and process wild animals; the earliest forms of communication were in the organisation of hunting parties. But in the late 1960s, female anthropologists began to study the previously ignored lives of women in contemporary hunter-gatherer societies. And what they discovered radically altered our understanding of the development of human culture.

Rather than hunted meat being the mainstay of most hunter-gatherer diets, it is foraged foods – vegetables, tubers, fruit, nuts, eggs, honey, shellfish, grubs and insects – that are the staple and daily elements of the diet. From these observations of contemporary hunter-gatherers, a new theory of the development of human culture emerged. Rather than hunting tools being the first forms of material culture, it was foraging tools – bags for carrying foraged food, and slings and straps for carrying infants. (However, unlike stone tools, these leave almost no trace in the fossil or archaeological record.) Indeed, the organisation required to communally care for infants and young children while women foraged was most likely what necessitated the development of language and complex culture. Forget man the hunter. Human culture blossomed around woman the gatherer.

Our ancient ancestors were intimately acquainted with the world around them. They had to be. Subsisting on foraged food required a deep knowledge of edible and inedible plants, of where, when and how wild foods grew, of how their growth was influenced by the plants and animals sharing that ecosystem, of weather and seasons, and of how foraging practices protected or destroyed plants for future use.

While we no longer rely on foraged food to survive, the practice of foraging draws us into the world around us. My family has discovered that the more time we spend in search of wild foods, the more intimately acquainted and attuned we become with the natural world. Not only do my children remember the location of the best patches of asparagus from previous years, for example, but they have learned, through experience, the environmental conditions best suited to this plant and, thus, where and when to look for it in new places. They have grown to know the seasonal changes that plants undergo and the other plants that share and are vital to the health of that habitat.

When we forage, our senses are caressed, challenged and enriched by the landscape. We walk up and down hills, through bright sunshine and dank shade, through woods and across fields, our hearts and breaths racing with exertion, feet slipping on damp rocks as we leap across streams or sinking into muddy tidal flats. Stopping to enjoy the sound of buzzing bees, our children learn from which plants bees forage at different times of year. They learn that other animals like the same foods as we do – wasps and birds on plums and pomegranates, the snuffling marks of a wild boar that got to the delicious asparagus tips before we did, the hollowed circles of grass made by a badger amongst the blackberry brambles, or our horse friend who makes short work of carob seed pods. And they can observe how wasps, ants, bees, birds and other small animals are linked to the life of each plant.

Such observations connect children to the natural world, allowing them to indirectly observe that the wild foods they collect are part of complex ecosystems. Further, they come to understand that they themselves are part of that ecosystem, just like the badger, the ant and the honey bee. They also learn that, to a far greater extent than any of these other animals, humans have the power to nurture or to destroy the environment. We teach our children, by example, to not take more than we need and to take only a little from each individual plant or area. Our children observe for themselves the destruction caused by wanton use and thoughtless disposal of plastics, metals and other industrial products, or by the needless felling of trees. 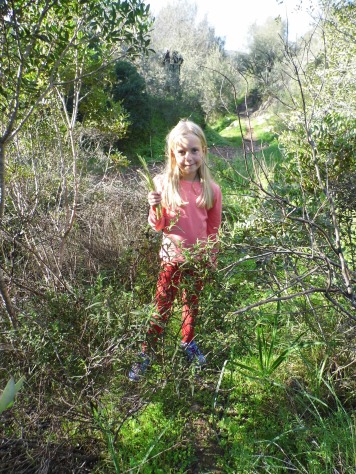 Foraging is a deeply rewarding activity. We spend quality time with our children, engaged in activity together towards a common goal. The wild foods we bring home are transformed into delicious meals for immediate consumption or preserved or dried for use at some later date. When we return home after a few hours of walking, talking and foraging, we are often tired and grass or mud-stained, but our spirits soar from all we have seen and done, our bodies and minds enriched and enlivened from our immersion in the landscape. And with that immersion comes a stronger sense of care, compassion and empathy for the natural world and its many and varied inhabitants.

I’m an anthropologist, writer, editor and educator. I write and speak about nature, family and culture and I edit fiction and non-fiction manuscripts. Please contact me regarding speaking, writing or editing, or if you just want to say hello.